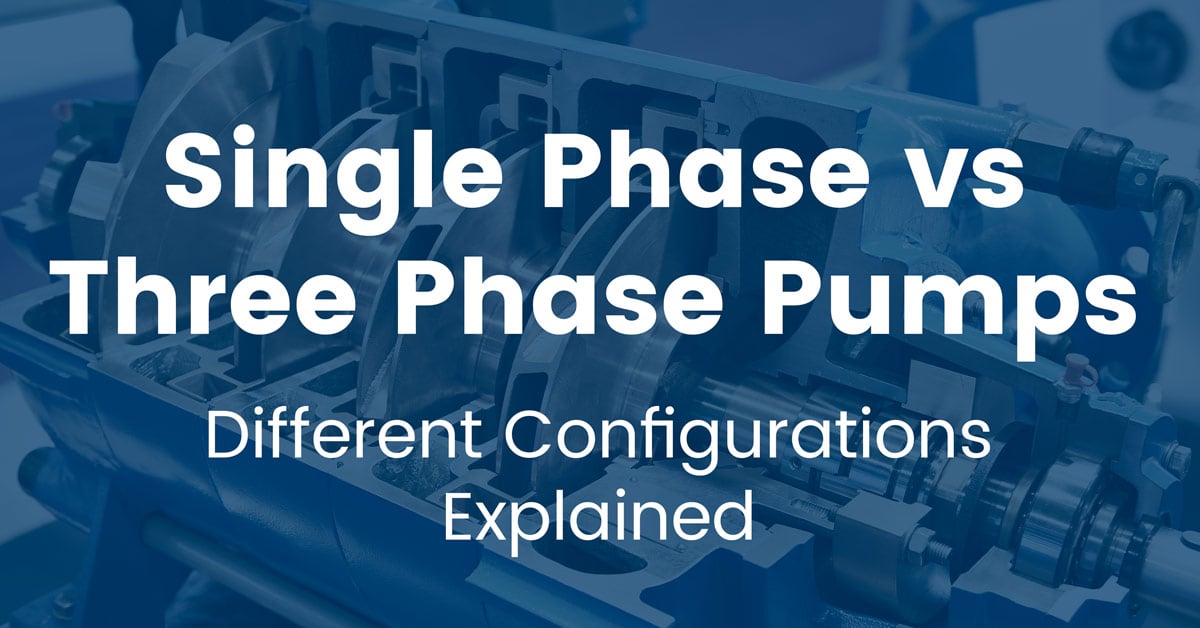 When selecting a pump for your specific fluid transportation requirements, you’ll likely come across the terms single-phase and three-phase. These are nothing but power phases used by pumps for their operations. To understand which pump to select for your specific applications, let’s learn more about the two power configurations.

Electric current can be of two kinds depending on the flow, namely direct current (DC) or alternating current (AC). While electric charge (current) in DC power flows in only one direction, AC power changes direction periodically. Power generated using alternating current follows the same waveform pattern as the current, alternating as a sine wave between positive and negative voltage. The power generation and its transmission over long distances using AC are far easier and less lossy than DC. Therefore, AC is the preferred mode for power transmission to residential areas, commercial buildings, and industrial facilities.

To further explain the sine wave nature of AC power, we use the term phase to describe an instantaneous position on the waveform cycle. When this position passes through the origin point of a cartesian coordinate system, it is considered a standard frame of reference. The phase passes from crest to trough in the form of a sine wave, and a corresponding amount of positive and negative current is provided to the system. Generally, power phases come in two types - single and three-phase.

Single-phase power has the most widespread availability, but despite that advantage, it is not suitable for powering motors having a horsepower rating greater than 5HP. That is because a single-phase motor draws a significantly higher current than a three-phase motor of the same horsepower rating. And owing to this larger current draw, the motor requires a significantly larger winding which consequently increases the cost of the motor. Apart from the higher capital investment, single-phase motors are also less efficient compared to their 3 phase counterparts, which further increases the operational costs. Furthermore, a single-phase pump’s lifespan is also shorter compared to that of a three-phase pump.

Since three-phase power is primarily used for catering to high electrical consumption, it is usually employed in commercial and industrial facilities. Three-phase power is a smoother and more balanced power source that allows low-cost motors and inexpensive operational costs. This relative consistency in the supply of power results from three-phase power having three identical sine waves overlapping each other. Each sine wave is evenly spaced from the other and separated apart by 120° or 2π/3 radians.

A pump designed using a 3-phase power supply is relatively more straightforward in design, more compact (small body size), and cheaper than a pump operating on single-phase power. A three-phase pump requires a comparatively higher starting torque, but if operated for a long time, it is more efficient than a single-phase motor. Hence we use them for industrial applications where a pump, once turned on, remains on for a long duration of time. Due to their simpler design and compact size, they also generate less vibration and noise during operation. A three-phase pump has a longer lifespan than a single-phase water pump if operated under the same conditions.

Need help in selecting a multistage pump for your fluid transportation requirements? Let our expert engineers assist you. Hayes is the oldest and largest pump distributor in the Northeast. Whether your applications are for residential purposes, operating heavy machinery, or for anything in between, our engineers can assist you in selecting the correct pump that will operate at peak efficiency.