A recent Pump audit conducted by Grundfos found multiple opportunties for savings  - eliminating $4500 annual maintenance, 97% power consumption, as well as reducing the noise levels that were troubling residents.  This case study provided by Grundfos covers the problem, the audit findings, and the solution that was implemented.

In the heart of a major metropolitan area is a 38-story condominium that was built in 2003. The original domestic water booster system had substantial operational issues. It was oversized for the application and the pump controls were inadequate for the job. The pumps supplying water to the upper floors were performing ineffectively, costing nearly $4,500 a year in maintenance, and they were noisy. The requirement was to identify an energy-efficient, little-to-no maintenance, compact solution. A pump audit was conducted. The existing system’s flow, pressure and power consumption was profiled.

The data collected revealed that one of the pumps was running around the clock, even when there was no flow, indicating potential for a significant amount of energy savings with a replacement system. After analyzing the prepared profiles, it was proposed that a new skid mounted multi-pump packaged system should be installed. Energy savings were projected to be 127,590 kWh annually. 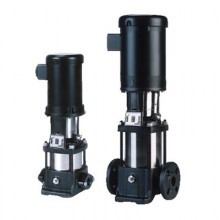 The pump package consisted of three vertical inline multistage pumps with motors totaling 15 hp, each equipped with a Variable frequency drive (VFD). This pumping system was chosen for the following reasons:

When the new system was installed, the transition from the old system to the new posed somewhat of a challenge since it involved shutting down the water system. But with careful planning it was executed without a hitch. Upon installation of the packaged pumping system, maintenance costs and noise were immediately eliminated, and its performance has been flawless. Power consumption has dropped by 97%, and in April 2012 the energy and water savings were verified by a third-party audit to be 130,000 kWh per year.

For more information on pump audits,  contact your Hayes engineer.